Warship building and design is an arduous undertaking and India now joins a select group of nations that have demonstrated proven capability to conceive, design, and build an aircraft carrier, writes C Uday Bhaskar for South Asia Monitor 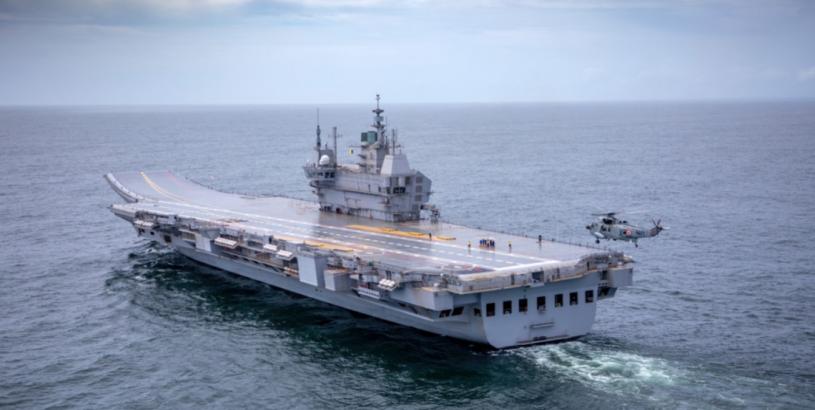 Wednesday, 4 August 2021 will be remembered as a momentous day in the annals of India’s chequered maritime history as the first indigenously designed and built aircraft carrier – the  37,500 ton Vikrant - set sail from the Kochi shipyard for its maiden sea trials.

It has been a long journey since the government accorded formal CCS (Cabinet Committee on Security) approval in 1999 for the Indian Navy acquiring ‘a carrier’ – to fill the gap created by the decommissioning of India’s first aircraft carrier – the INS Vikrant, which was acquired from the United Kingdom and commissioned in 1961. The original Vikrant was decommissioned in 1997. At that time, India had just one carrier – the INS Viraat which was also acquired from the UK. Hence the need to begin building an indigenous carrier was acknowledged and approved.

India, by the late 1990s, had acquired modest but credible indigenous capability in designing warships, largely enabled by the Indian Navy (IN) investing in and nurturing its own human resource dedicated to warship designing and building. What then began with the Leander project--where the Indian government ordered the construction of three Leander class frigates in the 1970’s soon moved to the Godavari class, which was followed by a series of significant success stories by way of designing and building new variants – such as the Delhi and Brahmaputra class of warships. For the record, India also designed and built its own nuclear submarine – the Arihant – though the ‘boat’ had a different genesis and trajectory.

Warship building and design is an arduous undertaking and India now joins a select group of nations that have demonstrated proven capability to conceive, design, and build an aircraft carrier. At 37,500  tons and with the kind of airpower that has been envisioned, the new Vikrant, when commissioned (hopefully by mid-2022), will enhance India’s trans-border military profile in a distinctive manner.

Soon after independence in August 1947,  India’s naval planners had evolved a blueprint for a balanced naval fleet centered around three light aircraft carriers. And, in a far-sighted policy decision, India acquired its first carrier, the INS Vikrant in 1961. At the time, India was the only Asian nation to operate a ‘flat-top’ and the small but powerful carrier acquitted itself with aplomb in the 1971 war for Bangladesh.

Sixty years later, in 2021, the second Vikrant has put out to sea for its trials and the big difference is the clear demonstration of ‘atmanirbharta’ – or the quest for self-reliance in certain niches of military capability. In 1961, India acquired an aircraft carrier that was designed and built in the UK. In 2021, the country has not only built its own carrier – but this has been done according to an Indian design – which is a major national accomplishment.

As Admiral Arun Prakash, former Indian Navy chief and decorated naval aviator opines: “Vikrant is the culmination of many dreams, nurtured by the navy for three decades and more. The dream had its roots in the 1980s when our naval architects offered us a 16,000-ton vessel designated a ‘Harrier-Carrier’. With the arrival of the indigenous LCA- Navy on the scene, the ship’s size jumped to 25,000 tons and it was re-named ADS (for air-defense ship). It was the acquisition of Gorshkov and MiG-29s from Russia, that wrought definitive change, and the ship became the ski-jump-equipped 37,500-ton indigenous aircraft carrier  that sailed majestically down Kochi channel today.”

The context to India’s journey towards self-reliance is mixed in the defense sector. On the one hand, despite its developing nation status, and below the median human security indicators – India has acquired commendable levels of indigenous capability in certain critical domains such as WMD (weapons of mass destruction) that pertain to nuclear weapons and missiles.

In like fashion, space/satellites and underwater nuclear propulsion are success stories. However, in the spectrum of conventional weapons and platforms, the track record is poor. India is yet to successfully arrive at a  totally ‘designed & made-in-India product that is on par with the imported item in relation to personal weapons (rifles and revolvers); tanks and artillery guns; trainer and fighter aircraft including helicopters.

After decades of efforts by the DRDO (Defence, Research and Development Organization) and defense public sector units – some breakthroughs (LCA and artillery guns) are on the anvil and hopefully, in a few years’ time, some degree of true ‘atmanirbharta’ will blossom. For this to be realized, many policy initiatives and cast-in-stone procedures will have to be objectively re-visited and inadequacies redressed.

In the interim, it merits notice that in an incremental manner, India has acquired a modest yet creditable profile in the warship design and building niche. This is even more noteworthy when the overall national manufacturing and quality control index is below the regional and global norm of industrial productivity.

To obtain appropriate geopolitical context, it is relevant to highlight the fact that the keel for the Vikrant was laid in 2009. And, twelve years later it is going for contractor sea trials. In 13 years (by July 2022), the carrier will be commissioned and will proudly fly the tricolor. In the same period, beginning from scratch, China commissioned its first carrier in late 2012. Since then it has added one more operational flat-top and two are in the pipeline.

India need not seek or aspire for equivalence with China by way of military inventory but Beijing’s unwavering focus on trans-border military capability in the extended maritime-space-cyber domain has a strategic sub-text that New Delhi can ill afford to ignore. The next Indian carrier in the pipeline must improve on the track record of Vikrant.