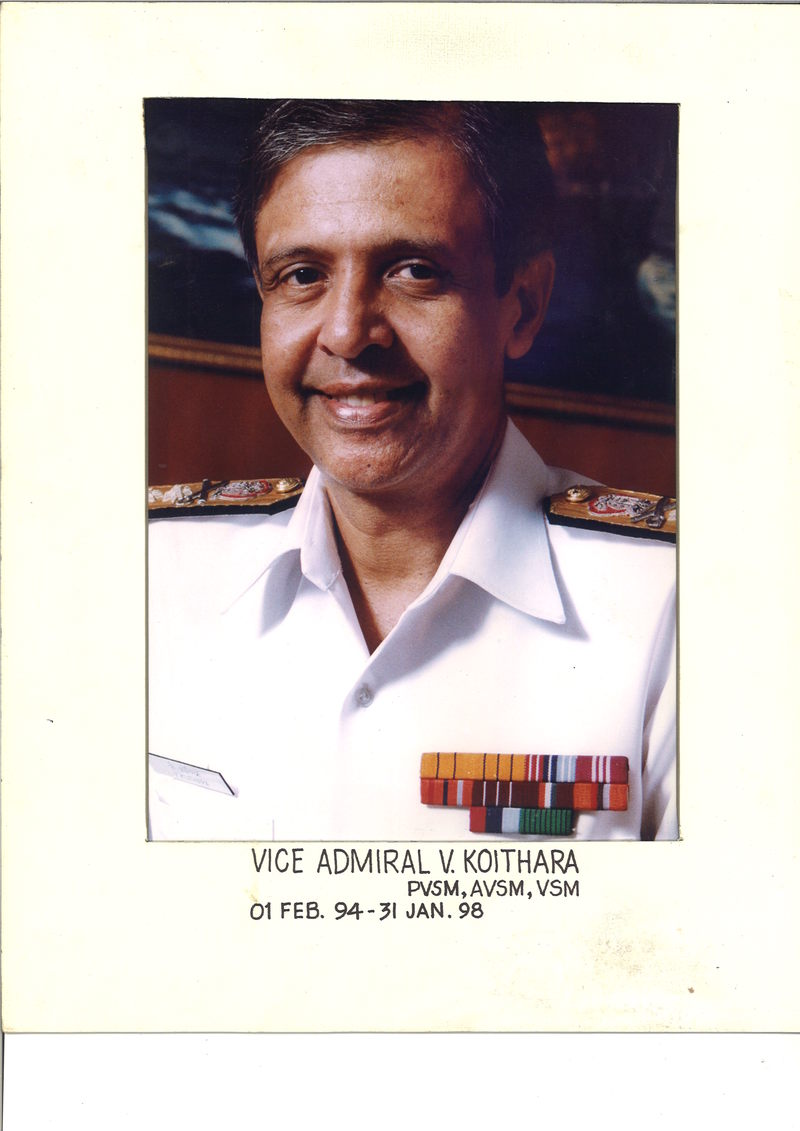 Vice Admiral Verghese Koithara passed away on May 22nd  in the Military Hospital, Wellington. He was buried the same day at St Joseph's Cemetery not far from his house. For many who knew him, this was an unexpected blow. Although from the Logistics cadre he stood tall as a Naval Officer whose intellectual abilities and capability were unique. In this tribute I  highlight some of his many accomplishments.

Admiral Koithara, was born in Trichur and  grew  up in Kochi, as his father was a practising lawyer and an advocate in the High Court. Perhaps it was through his father that he developed a keen intellect that was his hall mark right through his career and later  life. He studied at the Shri Rama Varma School in Ernakulam, which was one of the most distinguished schools at the time. He topped in this school and joined the National Defence Academy (16th course).

In the Academy his course mates remember him as being academically proficient  and among the more  brilliant of his peers. This was a significant achievement, as the 16th NDA  course produced a very large number of high flyers, PSO's, C-in-C's and a Naval Chief. Academics apart, the young Verghese Koithara (VK)   was a good swimmer in his squadron (Alpha) and a promising yachtsman. He was commissioned on 01 Jan 1961.

One might wonder why such a promising officer got Logistics, or what was earlier known, as the 'Supply and Secretariat Branch'. This happened when it was discovered that he had a problem of short-sightedness. This set-back however, did not impact adversely on his career profile. He was too bright a light to be hidden under a bushel. His professional acumen was seen clearly even in his formative years.

VK  did the mandatory sea and shore times as a Supply Officer,  among these being his tenure onboard INS Krishna and INS Tir.  As a young officer  he displayed high leadership traits and  was appointed as a Divisional Officer in the NDA, where he honed his skills in yachting. He took the NDA team to great heights and they participated in regattas even at the National level in 1969 -70.

After completing the Staff course in Wellington, as a Commander he was appointed as the DDOP (Sailors) at NHQ. Typical of him he immediately settled down to computerising the Sailors records with a small band of highly competent and computer savvy officers. It is perhaps in this appointment where he began to think and breathe HR management and even wrote papers on the subject. His demonstrated ability in this field, was recognised and he was made a member of the 'Cadre review Committee' in 78-79.

Subsequently he  underwent the Higher Defence Management Course in Secunderabad, where he had a  sense of the challenges that lay ahead in this field.

As a Captain VK  was selected for a diplomatic assignment as the Defence Attaché in Singapore and also accredited to the Philippines. It was here that he first became interested in international affairs and strategic studies, a domain  he delved into in great detail after he retired from service.

In a rare achievement, he served as the Naval Assistant, to the Chief of the Naval Staff, Admiral JG Nadkarni, who recognised his many talents and selected him despite VK  being a logistics cadre  officer.
Subsequently, he was appointed to the Directorate of Defence Planning Staff where he worked on the Navy’s New Management Strategy (NMS) .

I met Admiral VK  after he was appointed as the Chief of Logistics and I was a Controller, in the Materials Organisation in Mumbai.  It was evident that the one macro objective he had identified was to take the logistics cadre to a higher plane of functioning, one that provided immediate answers and was fully computerised. Thus was born the idea of the ILMS (Integrated Logistics Management System) that would provide transparency pan Navy . Appreciating that the greatest change needed to be in the Controllerate of Warehousing,  VK  formed a team of Officers to go into the changes (modernisation) that were required in the warehouses including the induction of  modern, material handling devices. Thereafter, he monitored the procurement of material handling devices, bins etc and a computerised method for tracking of spares. These systems today, are well oiled and functioning in a manner that would do him proud.  During his tenure as the COL from 01 Feb 94 to 31 Jan 98, his achievements were truly mind boggling.

After retirement, being a prolific writer VK  wrote on varied subjects, including papers on human resource management, where his radical views were perhaps not appreciated by many in the service at that time  but are now being considered pragmatic and implementable. But most of all he researched national security issues  and is counted among India's most astute  strategic writers. His published works include :  Society, State and Security: The Indian experience ; Crafting peace in Kashmir ;  Managing India's nuclear forces ; and  Nuclear posturing.

In addition he was a regular contributor to economic and political journals.  VK’s work on nuclear issues elicited considerable notice and was appointed as a Visiting Fellow at the Centre for International Security and Co-Operation, (CISAC)  Stanford University, USA. He also studied International relations and Politics at the Osmania University, Hyderabad  where he was awarded a Doctorate.

After so much had been accomplished in so many divergent fields, VK  got down to his last and final chapter of caring for the under privileged. Together with his wife, Indira, they set up from scratch an NGO, 'Yuvaparivartan Youth for social change' in Conoor. This was funded entirely by their own savings, where over 4000 women have benefited from the self help groups. They also set up health camps entirely at their own expense. Apart from this, they sponsored the education of children from marginalised families. For this they were selected for an award by the Pro literacy world wide foundation in New York.

In the demise of Admiral Koithara  the Navy has lost one of its finest officers , who accomplished  what was thought of by many as impossible. His departure has left us sadder but yet proud of what he has done, especially for the Logistics cadre. We pray that his soul finds rest and peace in his eternal home and his wife Indira finds the strength to come to terms with the loss of her husband.
I wish to thank many of my colleagues who helped me put this piece together and in particular Rear Admiral Sushil Ramsay and Commodore BC Jayaprakash and Capt V K Janardhan. And most of all his course mate Vice Admiral Adolph Britto.